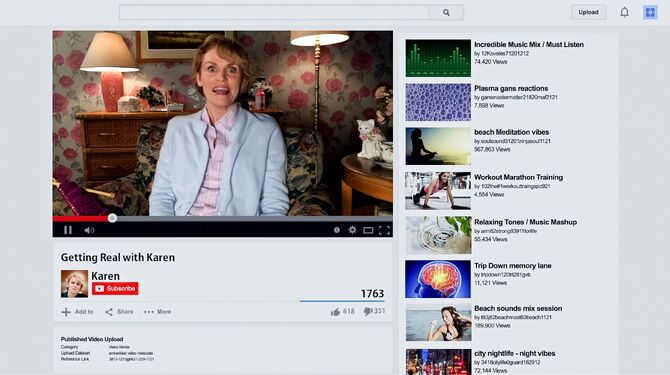 YouTube is a hosting website where account users can upload short videos to share with the public. A variety of original content can be viewed from tv and movie reviews, short films and also original series. The website has been integrated with mobile devices through an app to allow immediate file sharing. YouTube is one of several Social media featured prominently on the show. It's first appearance of YouTube was in the Season One episode "Josh and I Are Good People!".

In October of 2015, Rebecca Bunch agreed to be her boss Darryl Whitefeather's attorney for his divorce case. Her true motivation was the need to prove Greg Serrano she was a good person. At the point in the divorce proceedings Darryl and his ex-wife Stacy were trying to figure out custody arrangements for their 11 year old daughter Madison. Upon interviewing Madison Rebecca found out a secret Stacy had that could turn the tide of the case in Darryl's favor. Further research resulted in the discovery of evidence backing this up on Madison's YouTube channel. It was called the "Snailysitters Club" and featured Madison vlogging on her pets. Rebecca called an emergency hearing in order present this to the judge.

The parties involved in the divorce proceedings met in the judges chamber to view the YouTube video Madison uploaded. In it she mentioned she was home alone with her pet snails and about to cook some s'mores on a gas stove. Meanwhile she also stated her mother was at a motel with her boss just like last Friday. Because of this the judge immediately gave temporary full custody to Darryl. While they were dealing with this, Paula was put in charge of the office and had to deal with an unruly staff. This included Karen who was annoying everyone with her obsession with tampons. Karen herself had a YouTube channel called "Getting Real With Karen". One of her uploads was a review of a menstrual cup ("Josh and I Are Good People!").

In the latter half of 2016, Rebecca Bunch's love life took a turn for the worse when she was rejected by both Josh Chan and Greg Serrano. To help her get over her heartbreak she tried disposing of items she had from both men by lighting them on fire. When the flames got out of control she made a frantic all to 911 in which she rambled on about her recent romantic troubles. Her neighbor in 7B managed to take a photo of the aftermath once the fireman came. The 911 recording along with the photo was uploaded on a YouTube account called PSALM41743241. It was titled "Crazy Lady 911 Call" and the video quickly became popular receiving 11,740 views by the following morning ("When Will Josh and His Friend Leave Me Alone?").

Sometime later, Darryl Whitefeather and the law firm intern Maya formed an unlikely alliance to crash a party Rebecca Bunch was throwing at her new house. After brainstorming ideas in the board room, Maya came up with what she thought was a cool dance to impress Rebecca. Maya and Darryl went to Rebecca's house and performed the routine in tandem in front if everyone that was there. This includes Valencia Perez who filmed the dance on using her phone and later uploaded it online. The video made its way to YouTube where it received 1800 views. Darryl and Maya were pleased the dance became so popular and even performed it for thier co-workers in the break room ("Who Needs Josh When You Have a Girl Group?").