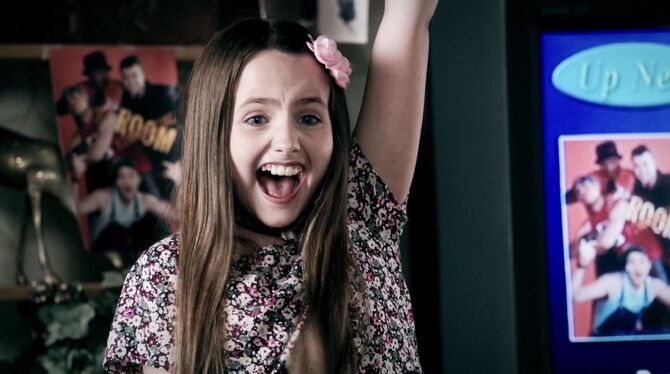 Rebecca Nora Bunch Rebecca Bunch when she was a child.

In 2015, Rebecca recounted to Paula how as a child she had a bad experience when she hosted her first party. Young Rebecca was throwing a get together for her classmates to watch a PPV featuring her favorite band at the time Room Temperature. Before the event even started her parents Naomi and Silas were loudly arguing in the next room. Rebecca was embarrassed and tried her best to cover up the domestic dispute only to have her father burst into the room. He was about to leave when he spotted Rebecca, kissed her on the forehead and told her good luck before leaving the house for good. A tearful Rebecca begged her classmates not to tell anyone at school what happened. Rebecca also imagined singing a song with her younger self (♫ I Have Friends ♫)("I Hope Josh Comes to My Party!").

Older Rebecca had another flashback sometime later when Greg Serrano accused her and Josh of being terrible people. She recalled staring into a mirror and asking herself what was wrong with her. Rebecca also remembered her mother calling her selfish, dramatic and weird adding that she was the reason her father left them ("Josh and I Are Good People!"). During Christmas time that year, Rebecca’s mother came to West Covina for a visit. Rebecca was frustrated when Naomi started criticizing her immediately. This brought back memories of Rebecca's childhood when her mother called her a loser ("My Mom, Greg's Mom and Josh's Sweet Dance Moves! ").

Later, Rebecca filed a class action lawsuit against the conglomerate known as Greater City Water. Her childhood frenemy Audra Levine was the opposing counsel defending GCW against the charges that they were siphoning off water from the surrounding San Gabriel Valley to Los Angeles. Rebecca recalled as a kid she and Audra had a childish feud which their mothers encouraged. This would continue into adulthood as the rivalry became more bitter and personal. Rebecca was unwilling to keep the vicious cycle going or stoop to Audra’s underhanded legal tactics. Because of this she didn’t present illegal evidence which would have won her the case ("Josh and I Go to Los Angeles!").

Rebecca decided to head back to New York after she was rejected by Josh. On the plane ride home she downed some sleeping pills and ran into her therapist Dr. Noelle Akopian. She had a vivid dream where a Dream Ghost version of Akopian took her on a tour of her past. She recalled that as a child she devised an elaborate scheme to visit her father after he divorced Naomi. She always thought her mother kept them apart and wanted to have regular visits with Silas. However, she realized that wasn’t the case and her father didn’t care as much for her as she thought. In reality, despite how harsh her upbringing was, it was her mother’s Naomi who was always there for her ("Josh Has No Idea Where I Am! ").

Retrieved from "https://cxg.fandom.com/wiki/Young_Rebecca?oldid=18017"
Community content is available under CC-BY-SA unless otherwise noted.